Last week, I was fortunate enough to represent Bidstack at the annual  IAB Leadership Summit in Palm Desert, CA. The conference brings together some of the best and brightest executives from agencies, clients, tech vendors and publishers from around the US, to discuss the prevailing topics hitting our industry.

The key theme for this year is how technology is rewriting the language of marketing and media.  We see this taking place in multiple facets of our industry whether it’s the impact of 5G, the demise of the cookie, engaging with consumers via AR/VR, voice and AI, or new legislation that could make or break million dollar companies.

Here are my 3 key takeaways that from this year’s conference: 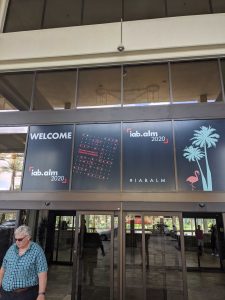 IAB CEO, Randall Rothberg, kicked off the conference on Monday by announcing “Project Rearc”. The idea behind the project is to create a set of standards in behaviour and conduct that enable technologies to address consumer demands for personalisation and privacy in a post cookie world.

To make the project come to life, Rothberg needs backing from bodies and organisations such as the  IAB, the government, and a host of other industry / consumer organizations. The new identifier will work across different browsers and privacy standards. The best part is that this won’t rely on third-party cookies, which will  be fully replaced by 2021 when Google launches their Privacy Sandbox.

During his talk, Rothberg said, “what we must do now – is re architect digital marketing to harmonize the three values that animated the renaissance, the reformation, the enlightenment, and the advance of modernity: personalisation, privacy, and community.  Consider, for a moment, that personalization and privacy – these superficially opposed values – are actually different perspectives on the same thing: individuality.”

As the demise of the cookie comes ever closer, advertisers need to start thinking outside the box and more creatively about what their media strategies should look like going forward. Rotherberg’s call to action on ‘collaboration’ at the conference really resonated with me because it’s not just a call to arms for all advertisers to work together, but it can also be interpreted as advertisers needing to collaborate with people outside of their industry to find the next progression for media, such as gaming and esports.

The IAB Leadership Summit kicked off on the same night as the Oscars.  With Quibi set to kick off on 6th April, they followed up from their first ad (which aired during the Super Bowl called “Bank Heist”) with five spots that aired during the Oscars.

The next morning, we had the opportunity to hear Quibi CEO, Meg Whitman, and IAB’s Randall Rothberg gave us more insight on how their company will fit in the ‘streaming wars’ ecosystem.  While the cookie-less world was the biggest topic coming into the conference, the most talked about session was about Quibi.

For those not familiar with Quibi, they are a mobile only streaming service where they are offering consumers premium storytelling in the form of premium movie quality shows that are 10 minutes or less that they call “quick bites”.  Here are some of the key things that I learned about Quibi during this fireside chat: 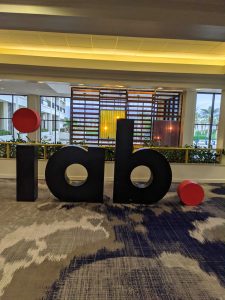 More importantly, what they showed next is what this can offer brands.

In some ways, Quibi and Bidstack are similar in that we both are examples tech companies that have made creative, unique and consumer engaging solutions to help solve some of the problems advertisers are facing.

3. 5G Will Shake Up The Gaming Experience

5G is poised to be the game changer that will provide lightning fast connections, allow us to send huge amounts of data from our devices and power creative executions from AR, VR, XR, machine learning and AI to name a few. 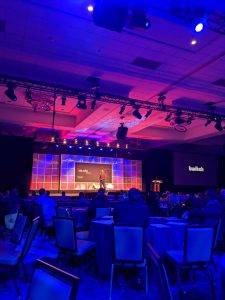 The importance of 5G connectivity was shown in full force during Twitch’s session, where they conducted a live stream with Twitch streamer Bahjeera and gave the audience a great overview of their platform.  In Twitch CEO, Emmett Schear’s, speech he talked a lot about community which is really what powers their platform and has made Twitch what it is today ( a platform with 15 million visitors per day). One of Schear’s big predictions for the gaming industry  was a shift in focus to mobile gaming. Emmett said , “With the advancement of 5G and processors getting stronger and faster in mobile devices, we should start to see more of those serious or complex games that you would normally play on PC or Console, now being played on mobile”.

With the promise of 5G, Google and Microsoft launched in 2019 their cloud based products Stadia and Project XCloud.  Cloud based gaming is different than playing on a console like an Xbox or PS4 due to the games being run on remote servers and being streamed to your device of choice, instead of being digitally downloaded or played off a disc.

Games via the cloud are not tied to one device or screen and will eventually allow gamers to seamlessly switch devices without losing their progress.  This type of functionality requires strong and stable connectivity, which is why there is such a huge demand for 5G.

All in all the leadership summit was a great opportunity to learn, catch up with friends and colleagues and build new connections away from the wintery climes of NYC.

Tweet0Facebook0LinkedIn0
More from Bidstack
In the Press  |  September 2, 2020
Mobile Marketing: Movers and Shakers
Mobile Marketing wrote about the newest Pubguard appointments in their latest Movers and Shakers article. Pubguard appoints Curran and Ngai to leadership roles Andy Curran has been named Chief Executive Officer and Alan Ngai as Chief Operating Officer at Pubguard, a malvertising platform subsidiary of Bidstack. Curran will focus on positioning the company as the...