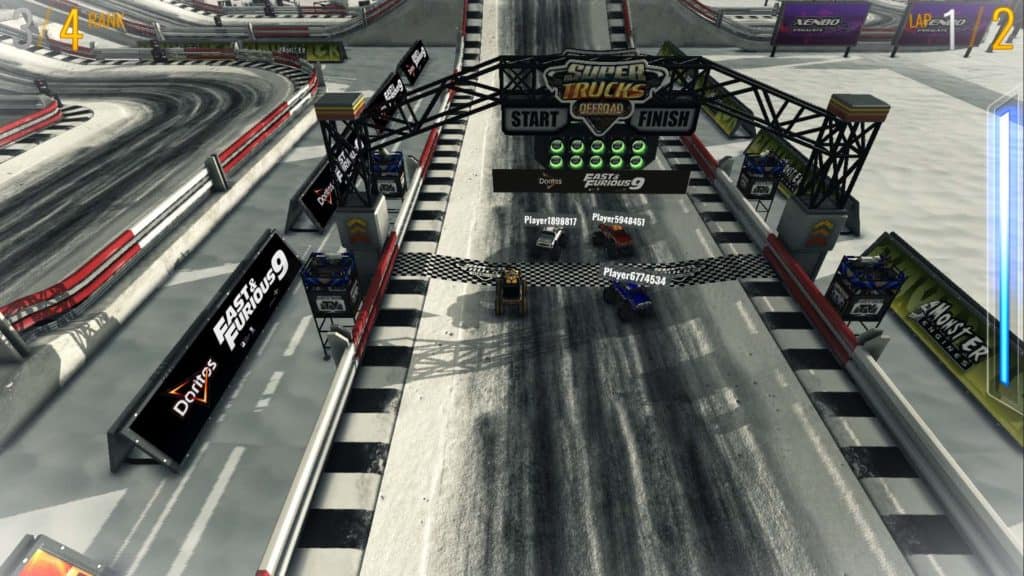 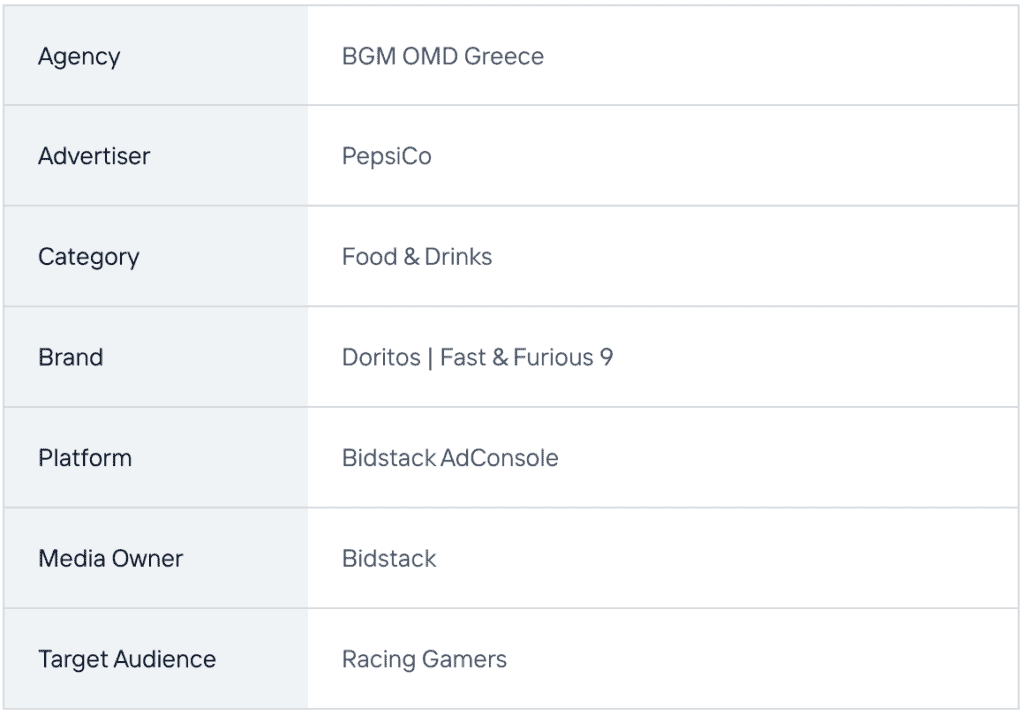 In June 2021 PepsiCo enlisted the help of BGM OMD Greece to promote a partnership between the leading snack brand Doritos and the latest instalment of the Fast & Furious film franchise, Fast & Furious 9.

BGM OMD Greece identified gaming as a key passion point for their target audience and partnered with Bidstack to engage consumers with seamless in-game branded experiences. With Bidstack’s help, BGM OMD were able to deliver the first-ever programmatic in-game campaign in Greece, connecting with gamers across auto and racing games via PC, tablet and iOS and Android mobile devices.

The co-branded partnership between Doritos and Fast & Furious 9 was designed to engage action film fans that had an interest in cars and racing and promoted the film whilst creating a brand association with the franchise for Doritos.

PepsiCo turned to their award-winning agency partner of 20 years, BGM OMD Greece, to develop their campaign strategy, and after researching the evolving media habits of their target audience they identified gaming as an innovative new way to reach consumers.

The objectives of the in-game campaign were: 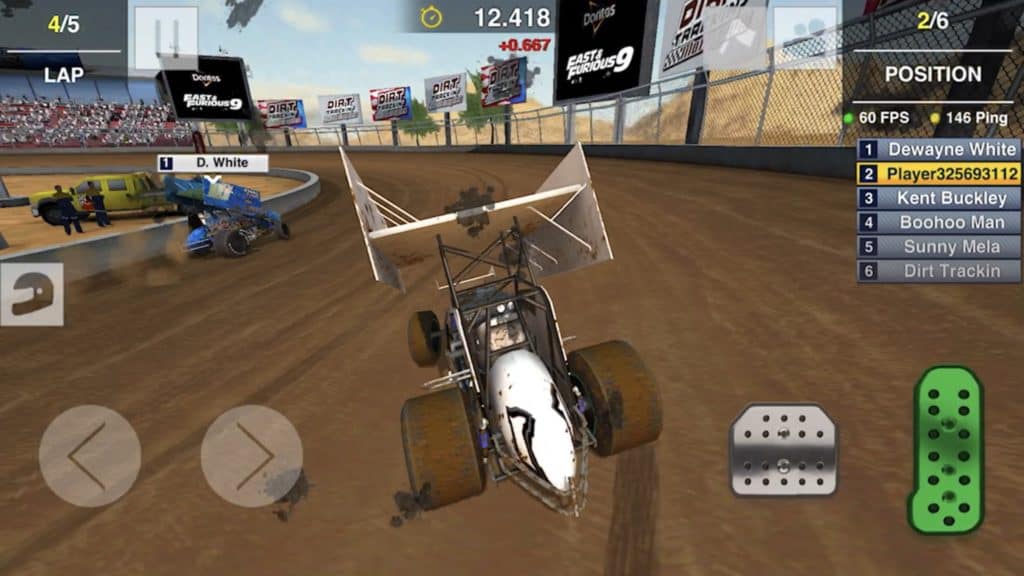 The ways consumers interact with media in their daily lives is constantly evolving, new channels such as gaming, social media and streaming services continue to grow in popularity, particularly amongst younger consumers. In the Greek market, this is no different, with 54% of console gamers and 44% of mobile gamers playing for at least 30 minutes every day and a growing number also tuning in to watch gaming content on platforms such as Twitch.

With ad-blocking on the rise across all demographics (40% of internet users in Greece are now utilising ad-blocking tech with this figure rising to 47% amongst gamers), innovative advertisers are reacting by exploring new ways to reach their target audience when they are focused, relaxed and engaged through gaming.

Unlike other advertising formats, gaming offers advertisers unparalleled levels of attention. People rarely devote their entire attention to television, in fact 98% of internet users in Greece admit to being distracted whilst watching, with 84% saying they are often on their phones and 33% saying they play games whilst watching TV. Whilst TV viewers can be distracted by these other screens, premium gaming environments require 100% of a player’s attention.

Research from the audience insights platform GWI indicated that 66% of the Greek internet population play mobile games and for many (60%) playing mobile games has become a part of daily life for them. When we narrow this in to look at racing gamers we can see that 73% of racing gamers in Greece are male and that 73% of that demographic fall between the ages of 16 and 44 years old. Whilst 83% of this audience utilise more than one gaming device.

With this in mind BGM OMD Greece set out to run an in-game advertising campaign for Doritos to promote their Fast & Furious 9 tie-in and searched the market for the best in-game advertising solutions. They partnered with Bidstack and looked to run in-game ads across their racing vertical, creating branded experiences in virtual environments that were aligned with the film’s racing theme. 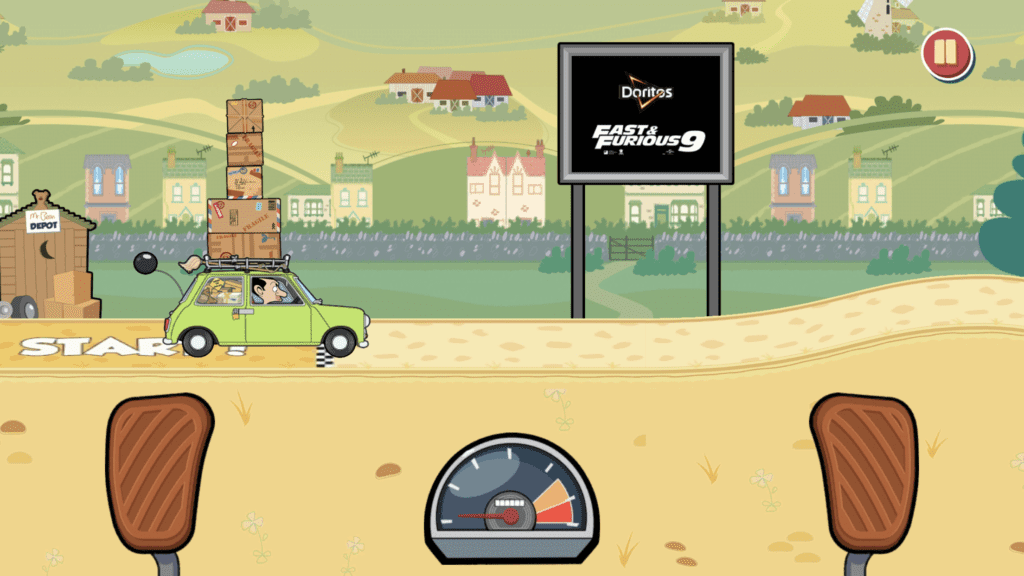 The Doritos x Fast & Furious 9 ads were brought to life in-game in a way that was designed to deliver high levels of attention whilst respecting the playing experience with ads that blended in seamlessly with gameplay on trackside banners, flags and billboards. 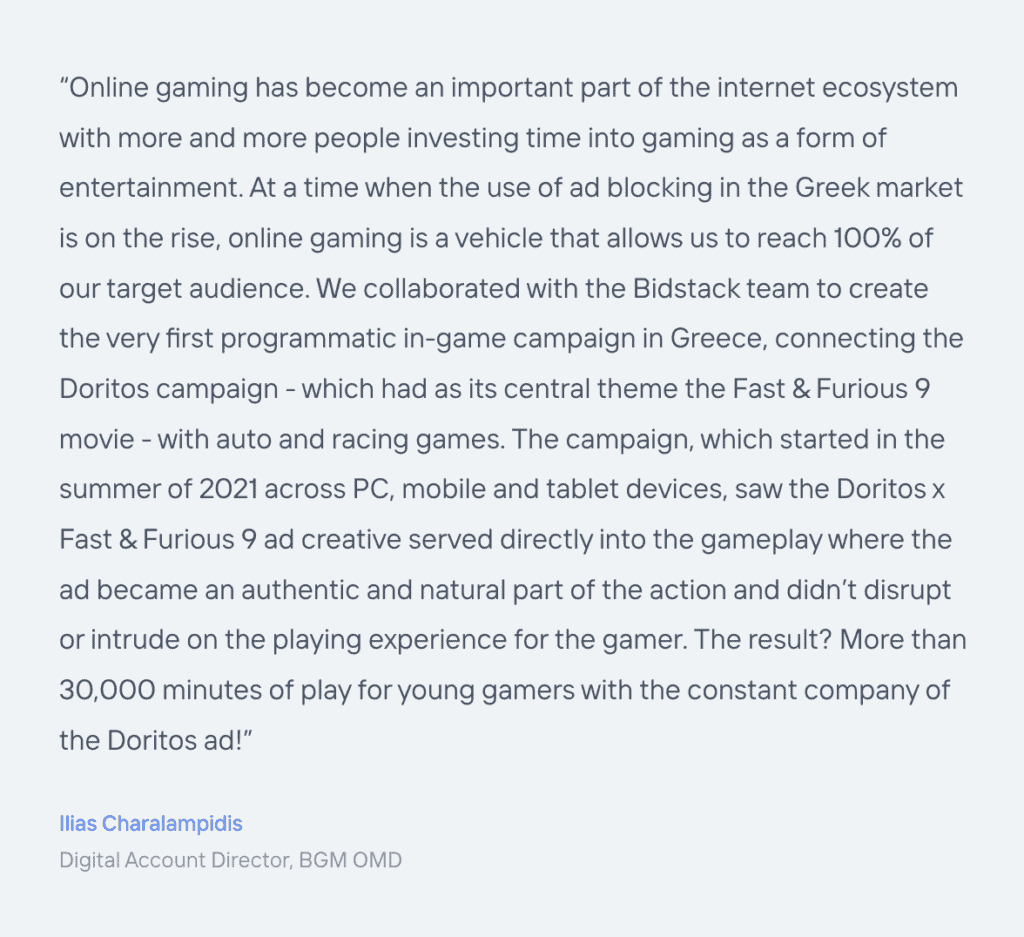